I love film – I have a film degree don’t you know – so keeping a hand in the industry by writing reviews and attending junkets for Close-Up Film was a passion-project and built on my experience as editor of Five Film and writer for Vue Cinemas. 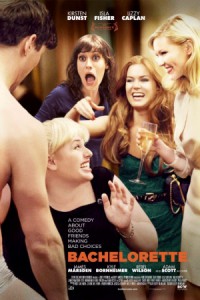 When Becky (Wilson) tells her friends that she’s about to get married, none of them can quite believe it. Why? Because in their group of pathetically one-dimensional characters – comprising Regan the Bitch (Dunst), Gena the Whore (Kaplan) and Katie the Idiot (Fisher) – Becky, you see, is the Fat One. And as we all know, Fat Ones don’t get married. Least of all to attractive men. And definitely not before any of their hotter contemporaries.

After six months of planning and secret mockery, the ‘friends’ find themselves at Becky’s Bachelorette party; a rather tame affair until Katie’s stripper friend turns up. But when, during his sexy showdown, he calls Becky by her old school nickname ‘Pig face’, she storms out. No sooner is Becky crying herself to sleep, her frenemies are indulging in a cocaine-fuelled bitch-fest which culminates in two of them trying on the wedding dress and subsequently (who knew?) ripping it. And so begins their quest to fix it in time for next day’s wedding.

As a female-directed, UK-produced, low-budget alternative to Bridesmaids, I so wanted to enjoy Bachelorette. However, in her debut feature, director Leslye Headland has managed to make an extraordinarily anti-female film that’s as charmless as it is unfunny.

Comparisons to Bridesmaids are inevitable but wholly undeserved. Comparing Bachelorette to Bridesmaids is like comparing Piranha to Jaws. Promoted as edgier than its American cousin, Bachelorette is simply an ugly film. It makes The Hangover look highbrow. Sex and drugs don’t make something edgy and swearing doesn’t make something funny. It’s script-writing at its laziest, and film commissioning at its worst.

Adapting Bachelorette from her own play, perhaps Leslye Headland could have done with an outside perspective; somebody to tell her exactly how awful it is. Not only is it awful, but it is confused, seemingly thrashing from comedy to commentary without stopping to join the dots. There is a casual and entirely out of place The Shining reference, when Regan tries to bash the bathroom door down to reach Katie, who’s unconscious after an overdose. Yes, apparently being sexually rejected is enough to turn a girl to suicide. He turned you down? Honey, reach for the Xanax.

Had Headland spent more time developing the characters, we may have given more of a damn about more serious aspects of their lives; developed in sub-plots that feel positively shoe-horned in. One frankly horrible scene on a plane sees Gena describing how she dishes out blow jobs to manipulate men. It’s all “buy me something pretty and you’re getting a level 8” vulgarity which only serves to make us dislike the character even more than we already did. In another incident we learn just how low Regan is prepared to go to prevent Becky from having her dream wedding. With vile characters like this, why should we care about hurried abortions, eating disorders, suicide attempts and drug problems?

Two saving graces were the gloriously ditzy Isla Fisher and the criminally underused Rebel Wilson. Fisher has a natural talent for bang-on comedy timing, and Wilson emits an on-screen warmth that should see her branch out from ‘fat friend’ territory.

However, Bachelorette remains an eyes-down, claws-out, kick in the tits to feminism. 83 minutes in it scrabbles desperately at a ‘feel good’ ending, as everybody dances to the Proclaimers’ ‘500 Miles’, seemingly forgetting that they all loathe one another. For me, the only feel good factor came in the knowledge that the credits would soon roll and one of the worst films I’ve seen in a long time would be over. 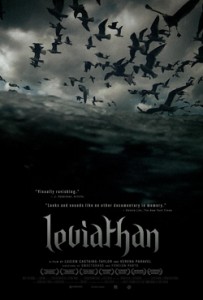 Directed by Lucien Castaing-Taylor and Verena Paravel of the Sensory Ethnography Lab at Harvard University, Leviathan returns cinéma vérité to its beautifully basic roots. By shooting entirely with GoPro cameras, the anthropologists have breathed new life into the genre. Clipped to fishermen’s clothing, suspended amongst seagulls, fixed to masts, submerged in the ocean, immersed amongst dead fish, this perpetually on-board style of film-making heralds new levels of observation.

The result is a film as surreal as it is real. The cruelty of the ocean and those who work it is essentially portrayed through a series of point-of-view shots. We are the men, we are the gulls, we are the vessel, we are the sea, we are the catch. It is a powerful experiment in empathy and an abstract study of the many facets of the fishing industry.

The high contrast footage is often disorientating, but it is invigoratingly original. When white splodges on a black canvas reveal themselves to be a flock of seagulls against the night sky, I found myself transported not only to the ship and its avian pursuers, but to the abstract repetition of a Warhol painting. It is this artistic slant that makes Leviathan as much an arthouse piece as it is a documentary.

Experimental visuals are enhanced further still by the almost dialogue-free soundtrack. In place of conversation we have teeth-grindingly loud industrial noise; clanking chains, metal-on-metal screeching, heaving rope, groaning machinery, thrashing seas, indecipherable shouting. To watch Leviathan is to experience it. You can smell the slaughter as the fish are mercilessly gutted, you can feel the sting of the wind as the crew toil, soaked to the creaking bone in sweat, sea spray and fish guts. It is relentless in its pursuit of the reality of life on the oceans. Think John Grierson’s groundbreaking 1929 spectacle, Drifters, chewed up and spat out into the 21st century.

Five minute sections are edited together through a series of jump-cuts that somehow manage to be both jarring and seamless. We move from the underwater prettiness of starfish confetti to the methodical shelling of scallops. Shocking in its remorselessness, we see the hooded figures of the crew de-winging hanging skates, scaling live creatures and emptying buckets and buckets of blood into the Atlantic. Yet for all Leviathan’s grimness, there is a beauty past its brutality. We see the crew showering, eating, dozing to the Discovery Channel’s Deadliest Catch, a nod to those other gods of the sea.
What is refreshing about Leviathan is, for all its savagery, it isn’t a film disparaging the fishing industry. It watches as a voiceless spectator, avoiding politicised commentary or opinion. The only hint of sentimentality comes in the credits which not only feature a tribute to lost vessels, but also list the Latin names of every species featured in the film. It is more poetry than preachy.

So after a battle for release, Leviathan has deservedly enjoyed a summer of success on the festival circuit. Importantly this experimental documentary has gone on to win a clutch of mainstream awards, most notably the Michael Powell award for best British feature at the Edinburgh International Film Festival. Yes, it could have done with ten minutes shaving off the end (repeating shots of what had been exciting in their first outing seemed pointless and, at worst, tedious in their second), but running time criticisms aside, Leviathan is a contemporary take of an age-old profession that although not an easy watch, is certainly an fascinating one.